As the Young Workers Association, we were at the crisis rally in Bakırköy with our slogans, black flags and rebellion. Last week we have distributed leaflets, made posters on the walls in different parts of the city. To raise the anger of the oppressed ones.

We will never give up the struggle against capitalism, which is itself a crisis, as it is today. We will continue to shout that all bosses are thieves. This fight is not just today’s fight. Now it’s time to fight. As long as the powers exist, as long as capitalism exists, this fight will continue. We will continue our fight with our black flag against injustice everywhere. 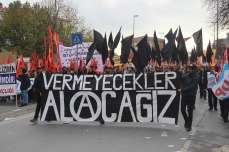